Fresh from the Sunday Farmer's Market!

It all started about sixteen years ago when we were living in SLC over the first summer of our relationship. We were having breakfast at our favorite bagel joint, Brachman Bagels, which had the best bagels you’ve ever tasted this side of the Mississippi. (Unfortunately, their competitors bought them out and the company is no longer in business.) It was the summer J started eating peanut butter again, and loving it. His favorite bagel was a sunflower seed bagel with peanut butter and honey. He could eat three in a sitting if he wanted to, they tasted that good. S was a bit more adventurous in his choices, and the one choice that remained the butt of all jokes for many years to come was so strange and unusual that even the guy behind the counter was perplexed by the concoction. S’s choice was a blueberry bagel with carrot hummus. The sight of the two items together – purple hued bagel and earthy golden hummus with bright orange flecks – reminded J of the day-glow shirts from the 1980’s when Wham! was the biggest thing in pop music. S thought the flavor combinations were perfect, but for J all he could do was chuckle and let S have his bagel, his way.

Fast forward to last Tuesday when J was perusing the New York Times website in search of the food section. The most popular article of the day, and rightly so, is Mark Bittman’s article on 101 salads. It’s the perfect article for summer. For many of us, salad is lettuce, maybe cucumbers and tomatoes with a favorite bottled dressing. Bittman goes beyond the standard, way beyond the ranch dressing and iceberg lettuce. His salads are wonderful and use many common and, some might think exotic, food items found in many crispers and pantries. So it was J’s surprise to see a picture of shredded carrots, tossed with sunflower seeds and a light vinaigrette, dotted with bright blueberries. If Bittman’s salad was the judge of our bagel debate, J now found himself on the losing side and S was the winner. Oh, sweet victory!

Most people wouldn’t have said a word to the other party in this sort of years-long debate. They would have played dumb and hoped that the other person would never come across the article, and most likely S would never have seen the article and J really didn’t need to show it to him. However, being of good Mormon stock, we both feel obligated to confess our sins to one another and to tell the truth even when unsolicited. So when S came home that afternoon one of the first things that J did was apologize and accept the fact that maybe he had gone too fair in his teasing of S for his unusual taste in food combos after all these years.

So this Sunday our plan is to go to the farmers’ market and pick up some carrots and blueberries and to try out this simple salad. The flavor combination that S has been craving all these years, yet has never tried again for fear of being ridiculed, will get a fresh interpretation. We ask all you out there who read our blog to try the recipe and let us know what you think. Are S and Bittman correct in their flavor combinations or is J the one who has the better sense when it comes to blending the sweet and savory? 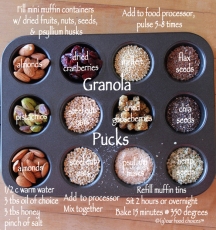