Last Thursday, J. was having a joyful afternoon in the kitchen. He was making ratatouille for dinner and a Bolognese to freezer for future dinners. It was the summer’s first batch of ratatouille and we were looking forward to the complex flavors of this seasonal treat. Most people associate summer with the taste of fresh peaches or tomatoes, but for J., there’s nothing that tastes like summer more than this long, slow cooked wonder of summer’s bounty: roasted eggplant, tomatoes, zucchini, onions, and peppers. We eat it warm, cold or hot, alone or accompanied with poached or fried eggs, roasted chicken, thinly sliced beef or freshly baked bread. This particular rendition started with oven roasted zucchini and eggplant from our Farm Fresh to You box and included a sauté of onions, peppers and garlic. Once roasted and sautéed, the ingredients are combined in a large stockpot with fresh tomatoes and left to cook for a good 20-30 minutes on the stovetop. We use a lot of olive oil. So much, in fact, that the end product has a beautiful glistening layer of rich oil on top. It’s delicious and oh so mouthwatering. This was to be the first masterpiece of summer. 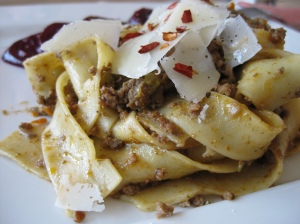 The Bolognese started with rendered bacon cooked until crisp. Once the slices, typically 3 or 4, are removed from the pan we add minced onion, carrot, and celery to the fat to soften. Next comes the garlic and ground beef (most recipes call for ground veal and pork) which we break up with a potato masher until well crumbled. The meat and veggies then cook until they’re well browned. Moving the meat mixture aside, a hot spot is formed for the tomato paste to cook for a minute or two before being incorporated with the rest of the meat. Wine and milk go into the mixture next and then slowly reduces over medium heat. Sometimes canned tomatoes are added to the meat mixture, but since J. added the tomato paste, the canned tomatoes were unnecessary. This is a slow cooked sauce that takes an hour to an hour and half for the meat to tenderize, but it’s well worth it. 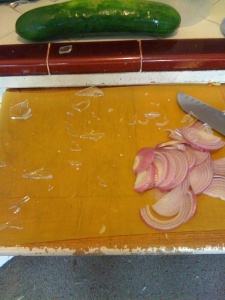 So, what happened Thursday? With all the chopping, sautéing, browning, and roasting going on, J. was using a lot of bowls and plates to keep order on the counter. He needed a glass bowl for one of the vegetables and reached into the cabinet for one of the clear glass mixing bowls we’ve had for years. What happened next couldn’t have been anticipated. He touched the glass bowl with his ring finger and POW-BAM! The glass bowl exploded into a million pieces. OK, it might not have been ‘a million pieces’, J. really didn’t count the number of shards littering the kitchen surfaces, but it was a lot. He stood there stunned, shocked. “What the hell just happened?” Nothing like this had ever happened before. He thought he was under attack by a sniper. He couldn’t believe it, shattered glass littered the counter and shards were scattered all throughout the cabinet that houses all our tableware. Broken glass was spread over the floor, the stove, and the sink. His ratatouille and Bolognese were destroyed. He wanted to weep for all the food that was lost. As is typical of J., he wasn’t much concerned for his personal safety. Thankfully there were no serious injuries, just one tiny, tiny scratch on his arm

He rushed to the living room to find Moe and then locked him in the bedroom to keep him from nosing around the kitchen while he started the long process of cleaning up. Moe would have been all over the mess and goodness knows what havoc glass splinters might wreak on a long haired cat. He grabbed his iPhone and took pictures of the wreckage, and then called S. to tell the story.

The glass bowl was washed in the dishwasher earlier that day, but it had been out and dry for well over three hours. S. did a google search and found that this was not an isolated case. And though spontaneously exploding glass isn’t a common occurrence, it does happen occasionally. It happens to tables, windows and doors. It can happen to just about anything that’s made of glass.

Now, we’ve used these bowls for years. We’ve even used our hand held mixer in these bowls without incident. For one of these bowls to explode at the touch of a finger, it’s just crazy. So now, instead of finishing cooking and working on our food blog, J. had a huge mess to clean up. Sweeping, wiping, vacuuming, more sweeping, more wiping, more vacuuming. It was a mess. All the dishes on the shelf had to be washed, and so did the dishes he used to prep the food. The more he cleaned the more baffled he became. The shock was wearing off and even he was skeptical that it had happened as he remembered. Maybe he dropped the dish, or maybe he hit it against the cabinet wall. But then he reviewed the pictures again and thought how lucky he was that he didn’t get glass in his eyes.

After all the cleaning up J. was in no mood to cook dinner, even a sandwich was going to be too much effort. We decided it was the perfect occasion for take-out Chinese. We’ve been ordering from Andy’s on Ninth Avenue for years, but we wanted to try something different. Thanks to Yelp! J. quickly found the best rated Chinese delivery in our neighborhood, Nan King Road Bistro. We ordered the Glazed Pork Short Ribs, Beijing Roasted Duck Biscuits, Mongolian Black Bean Chow Fun and brown rice. Luckily the squash, one of the roasted ratatouille veggies, didn’t get covered in glass because it had been safely sheltered in the oven when the explosion occurred. It joined the take-out on our plates, an odd reminder of the afternoon’s kitchen drama. Although the food was above par (we especially loved the short ribs) we felt a little gypped. There were no fortune cookies! One of the things we really look forward to in our Chinese delivery are those sweet crunchy cookies. J. once won a $500 lottery by playing the numbers on one of his fortunes and playing those numbers has become a little bit of a tradition. 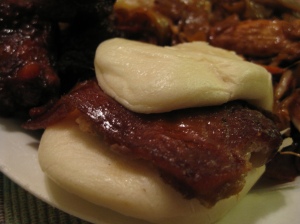 What would our fortunes have held? Maybe we should have ordered from Andy’s or ordered the day before. The cookie might have warned us of the dangers to come on Thursday. It could have read something like, “Fireworks in the kitchen,” or “You will be showered with glass.” Maybe something direct like, “Don’t cook in the kitchen tomorrow.” Or simply, “Glass breaks!” Whatever the fortune might have been or should have been is a mystery to us, just like why the glass bowl decided to self-destruct at just the worst possible moment. 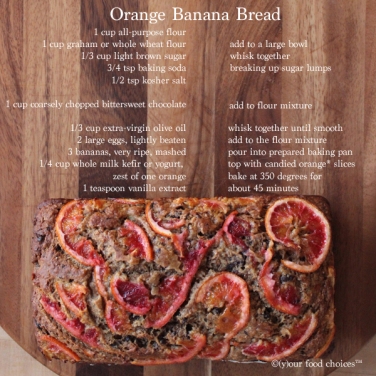 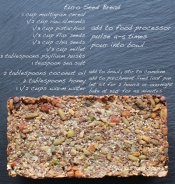 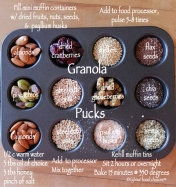 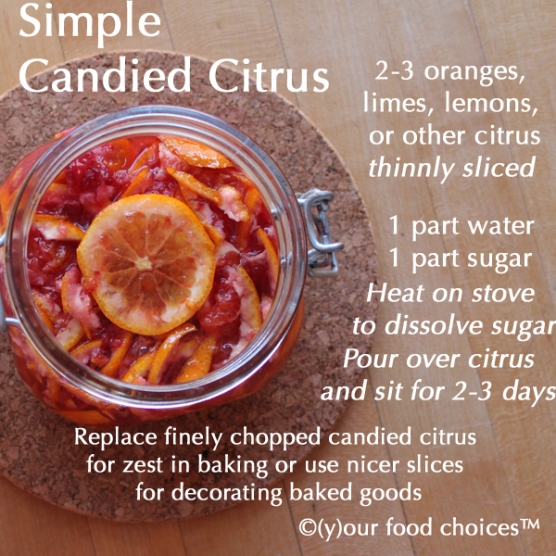